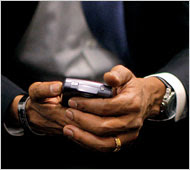 "The President has a BlackBerry through a compromise that allows him to stay in touch with senior staff and a small group of personal friends in a way that use will be limited and the security is enhanced to ensure his ability to communicate, but to do so effectively and to do so in a way that's protected."

So that's it. He'll keep the blackberry. Only a few folks will have the email address. Most everything sent and received on it is subject to the Presidential Records Act.

Sounds like a clear victory compared to carrying the Sectéra® Edge™. That's a nice & secure device and all, but it's a brick...
at 11:54 PM