Barack Obama may have been (as per usual, no official comment) provided a secure device that will allow him to stay connected, via email and voice. I was complaining last week about the possibility of surrender to this security problem. It appears that there was an answer available and the right people just needed to talk.
The device he is most likely to use (there are other available, but this is the closest match) is the the Sectéra® Edge™ SME PED from General Dynamics.
It offers "Secure Communications Interoperability Protocol (SCIP), allowing secure phone calls to be made with existing SCIP compatible devices. It also implements High Assurance Internet Protocol Encryptor Interoperability Specification (HAIPE® IS) to provide secure connectivity with classified networks (including the TACLANE® family of network encryptors)"

It's not an actual blackberry device, which may or may not be a big deal, but it looks pretty close in physical layout. It is based on Windows Mobile, so that will be a huge change from the Blackberry OS. Also, the device is HUGE. Based on the published specs, it is 3.2" wide, 4.9" tall and a whopping 1.3" thick. That's about a half inch taller and wider than a Blackberry 8800 and nearly three times as thick. And it weighs 12ozs, also about 3 times what an 8800 weighs. That will make the unit feel like a brick, for sure.

Here's a diagram of the components. It looks to be extremely capable. 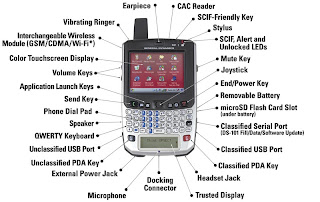 It's expensive too. A 2 year contract (with warranty) on Sprint or Verizon is gonna cost us (we pay for this, you know) $3,350. Accessories are equally pricey. The Classified USB Cable is gonna cost us $75, the AC Travel Charger and the Vehicle DC Power Adapter are $100 each, the Desktop Charging Adapter is $250, and the Micro SD 2GB Unclassified Memory Expansion is $100. Maybe they can catch that last item on woot.com at some point though. They sometimes have a better price. ;)
at 5:59 AM