Tina Fay is gonna have a field day 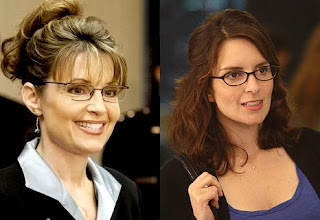 A user on Digg posted this info in a comment. It's not 'Official Campaign' language, just one reader's summary of the Obama Tax plan. I really liked that she had put it all together. Other folks thought it would be nice to have a version to hand out.

So...
I created one. I made it to be printed double sided, with a graphic from the WashingtonPost.com on the back. Maybe you will find it helpful. Let me know if you like it.
at 4:17 PM 0 comments

﻿
Tweet
This strikes me as odd.
Blender did a story on the candidates and their Top 10 songs.
Obama had a pretty normal looking list, with some more recent stuff. Not bad for a guy 47 years old. Kinda weird he included Yes We Can by will.i.am, but I like that one too.

I didn't realize this. I stumbled on it the other day. McCain has not cast a vote in the Senate since April 8th. In fact, he is #1 on missing votes right now. That is simply amazing to me. Why are we paying him? How can he bitch about Congress going on vacation when he has BEEN on VACATION since April? I know the haters are gonna point out that Obama has missed plenty of votes also, and I would agree, but if you look deeper it looks different. Since Jan 07 McCain has voted 231 times on 58 days, and missed 399 votes. Obama has voted 348 times on 96 days, and missed 282 votes. My math says: Obama has cast 117 more votes on 38 more days. Where is John on this? Well, at least he is a better Senator than student... Mr. 894 of 899
at 8:45 PM 0 comments